The General forum is where users can discuss any topic regarding Motorola communications equipment - hardware, software, etc. There are also several focused forums on this board, so please take the time to ensure that your questions doesn't fall into one of those categories before posting here!

I've got an M1225 that I'm trying to get up and running out-of-band on ham frequencies. In-band, power output is solid and I've tuned it to a 15W low, 30W high setup. Out-of-band, however, is another story.

I've got the national APRS frequency programmed (144.390), and I'm getting 2.5W in low and 6W in high. Way lower than it should be. I'm guessing the radio is doing the classic "pulling tuning values from wherever" trick that plagues the older radius series radios.

Curious if anyone else has seen this, or if anyone has some solutions to suggest. The elegant way to move forward would be to edit the band edges in CPS and/or the codeplug tuning partition to extend down to 140 MHz, but I can find no useful documentation saying anyone else has ever attempted that.

Thanks in advance!
Top

Yes - I have seen this before very low in the vhf-hi band spectrum. In general maxtracs do not
perform well in that low of vhf-hi spectrum and sorry but i have no suggestions for you in this
regard expect that their is most likely a solution on perhaps one of the maxtrac websites perhaps
on the yahoo group.
fineshot1
NJ USA
Top

I think that's probably the route I'm going to take. The mod for manual power control using a potentiometer should work for the M1225 as well, seeing as the power control circuit is very similar.

Will report back with my findings!
Top

So after some investigation, I've determined that it's not in fact a software limitation resulting in low output power out-of-band.

Firstly, I noticed that the power control voltages coming from the radio's MCU seemed to be very similar at 150 MHz and 144 MHz. So, either I got lucky with whatever random tuning value it picked, or it's actually interpolating out-of-band power levels properly.

So, I went ahead and took the nuclear option with my testing. I totally bypassed the power control circuitry and directly fed Q2420's bias voltage with a bench power supply to see what the power output performance looked like across the bands. And, it's not very good. 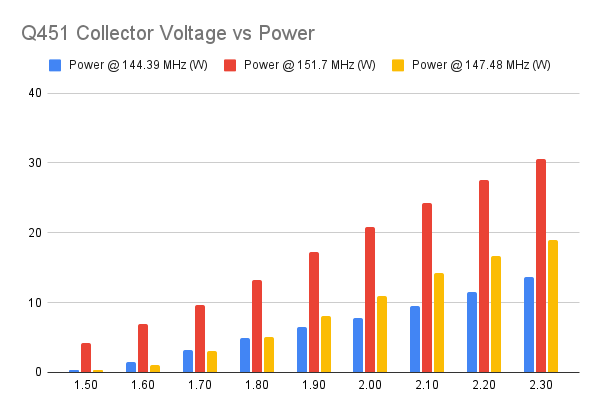 Theoretically I could hack in a voltage regulator on the bias line to Q2420 to manually set power, but if I ever wanted to switch this radio back to an in-band channel I'd have to remember to lower the bias voltage significantly or risk blowing something up.

I think I'll stick with the older Maxtracs for my packet radio. They're significantly more well tested and less finnicky.
Top

Kenwood TK-705D & DH's are also well at covering the 2-meter ham band with little or no retuning. Sadly, they have no external accessory connector, so some internal work is required. Just a thought.
"Trust me, I know what I'm doing!" - Sledge Hammer
Top
Post Reply
5 posts • Page 1 of 1